Discover the 'why' behind Auckland's unique and captivating personality with visits to the Auckland Art Gallery, MOTAT and Maritime Museum.

Auckland is more than skin deep. It's a city with a fascinating past built by people who came from all over the world to start a promising new life. By digging into the art and cultural history of the city, you'll get a better idea of what makes the city tick.

Be wowed at the Auckland Art Gallery

Art has a wonderful habit of making you think. An hour or two spent wandering a gallery stirs up thoughts that ordinary life doesn't inspire, and that's why visiting Auckland Art Gallery is always a good idea.

Established in 1888, Auckland Art Gallery Toi o Tāmaki is an internationally-recognised cultural asset that belongs to all New Zealanders. The gallery owes its existence to two great 19th century philanthropists - Sir George Grey and James Mackelvie - who donated the first works of art, as well as funds to ensure they were appropriately housed.

Today the gallery reflects New Zealand's diverse and ever-changing society through works created by the country's best artists. It also reaches across oceans to bring internationally-acclaimed art to New Zealand. Exhibitions change frequently, so there's always something new to appreciate. The gallery's café often designs dishes to match a key exhibition, so that your art enjoyment extends into a taste experience.

Launch a trip to the New Zealand Maritime Museum in Auckland

Located at the edge of Viaduct Harbour in downtown Auckland, the New Zealand Maritime Museum, Hui Te Ananui A Tangaroa, isn't just for boat-crazy people; it has broad appeal for all ages.

Permanent exhibitions include 'Blue Water, Black Magic', a tribute to Sir Peter Blake and New Zealand's involvement with the America's Cup; 'Landfalls' explains the pioneering voyages of discovery that brought Polynesians and European explorers to New Zealand; 'New Beginnings' tells the stories of settlers who moved to New Zealand between the 1850s and the 1960s, a journey that involved weeks on a ship; and 'Kiwis and the Coast' is an entertaining look at New Zealand's holiday lifestyle. You'll also find temporary exhibitions covering everything from ocean-related art to beachwear.

A special part of visiting the Maritime Museum is an excursion on the water. The museum has several working vessels that do joy rides most days - SS Puke, a genuine steam tug; Nautilus, a vintage launch; and Ted Ashby, a heritage sailing scow.

Visit the Museum of Transport and Technology (MOTAT)

MOTAT is a magnificent place for a family day out; it's also engaging for people travelling without kids. The themes of transport and technology are relevant to everyone and MOTAT has found many entertaining ways to bring the past to life. On the third Sunday of every month, MOTAT has a live day that brings operational vehicles and machines to life.

There are two sites to explore at MOTAT and they're linked by a ride on a historic tram: 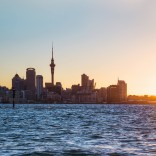