Discover a better way to fly and the best way to shorten long haul.

Whether you're a couple who'd like a bit of extra room, a parent

with a young child or a parent with two restless kids, you'll find

our innovative Economy Skycouch™ is the ideal solution.

So what is an Economy Skycouch™ exactly?

It's simple. Imagine a row of Economy seats that can be turned into a couch after takeoff. So you and your friend or family member can stretch out. Clever, right? Comfy, too. It's so flexible it can be used as seating, a couch or even a play area. You'll also get some lovely bedding and pillows. It's a world first.

Space to stretch out

Create a flat, flexible space for you to enjoy however you like. Skycouch is a great option for families, couples and those just wanting a bit of extra personal space. You can choose the setup to suit your needs.

All three seats will be allocated to your booking and are reserved just for the passengers in your group.

Place yourself at the centre of the Air New Zealand cabin experience and take a 360° tour*.

How do I use a Skycouch?

The seats are the same as an Economy seat, except you have an additional footrest that folds to form a couch. Each person can choose if they want their footrest up or down. These adjust to 60 and 90 degrees.

The arm rest on the window side goes all the way up to create a comfortable lounge space. All the armrests in the middle seats also disappear in the back of the seat.

When it's time to rest, we'll help you get your Skycouch set up. We even have an extension seat belt for when you want to lie down.

What are the dimensions of a Skycouch?

Where are the Skycouch seats located?

The Economy Skycouch seats are located in the forward Economy cabin of all our 777 and 787-9 aircraft. Seat and row numbers vary by aircraft but can be found on our seat maps.

The Skycouch Infant Harness and Belt allows infants to remain lying down throughout the cruise phase of flight, even when the seatbelt sign is on.

The Skycouch Infant Pod is an optional collapsible sleep space to provide additional comfort and protection for infants and peace of mind for parents or caregivers.

The Skycouch Infant Harness, Belt and Pod is complimentary for all Economy Skycouch customers travelling with infants. The Skycouch Pod will be made available for customers with infants that fit within the height limits of the pod, subject to availability.

Find out more information on the Skycouch Infant Harness, Belt and Pod.

Book a Skycouch for your journey

You can add Economy Skycouch to an Economy fare when booking long haul flights online. You'll see 'Skycouch on board' beneath the price if the option is available. You'll find costs and details when you get to the 'extras' page.

Choose your configuration based on how many people you're travelling with. We offer options for one Skycouch, one Skycouch plus an Economy seat or multiple Skycouches.

You can add Economy Skycouch to an Economy fare when booking long haul flights online. If the option is available you'll see 'Skycouch available' beneath the price. You'll find costs and details when you select your seats.

Choose your configuration based on how many people you're travelling with. We offer options for one Skycouch, one Skycouch plus an Economy seat or multiple Skycouches.

Book Economy Skycouch™ for your next flight 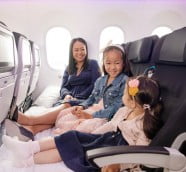 Take the stress out of long haul flights. Enjoy our inflight entertainment while the kids stretch out and play.
Book now 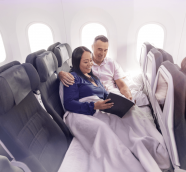 Choosing to fly on a Skycouch can give you that extra bit of personal space and comfort to relax on long-haul flights.
Book now 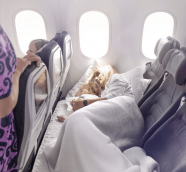 Stretch out and relax in your own Skycouch row.
Book now